Organization: RingCentral is a publicly traded provider of cloud-based phone and communications systems for businesses.

Operational Challenge: RingCentral needed to solve configuration management problems for rapid delivery of changes and quality for complex Hadoop big data analytics and other systems on which the company's phone and communications business depends.

Project Duration: Initial big data deployment took 6 months (rather than 12+ months). Other deployments are ongoing and will be completed in 1Q15.

Benefits: The company moved from an outdated version of Hadoop and gained application speed, quality, and reliability with Qubell self-service. Teams spin up tests in days, not weeks, and deploy on Amazon cloud for agility in a dynamic market. Data analytics enable insight into phone and communications performance and usage.

Victoria Livschitz presented at the East Bay Meetup on Docker, Containers and Cloud Foundry PaaS event on March 5, 2015. The talked focused on the emerging control stack for end-to-end enterprise automation and demonstrated the power of Qubell + Docker. The talk covered the following topics:

Organizations increasingly rely on cloud-based solutions and applications (apps) to propel business into the next generation. To help support this migration, software providers develop products to improve processes.

Headquartered in Menlo Park, CA, Qubell is a privately held organization that does not disclose its annual revenue. The company is dedicated to enhancing cloud application development. It offers an autonomic application management platform for cloud applications, which enables them to become adaptive, self-managed services that configure, heal, optimize, and protect themselves in response to changes within dynamic cloud environments.

Cloud-centric ‘autonomic’ application management company Qubell has announced Qubell for Hadoop Developers. The software is intended to enable Hadoop programmers and data engineers to get access to on-demand test environments for big data analytics projects. The assertion here (made by IDC analyst Melinda Ballou) is that too many companies are still at what has been called “immature levels” of quality and configuration management for production environments that can support big data analytics — and so, logically, these firms are not really using or taking advantage of big data analytics yet.

If we can accept the contention that big data analytics testing is not easy, then we can drill down to ask why exactly this job and procedure is so hard to execute in real world workplaces.

1) It is still comparatively early days for both Hadoop and for big data analytics, so it’s not unfair to suggest that firms will often exhibit a lack of the required levels of in-house testing infrastructure required to execute big data projects.
2) As a direct corollary and consequence of point 1) firms also often suffer from a lack of skills related to configuring, testing and managing analytics tools and environments

When Pigs Fly and Applications Manage Themselves…

Did you ever think a day would come when cars could drive themselves, drones would fly or that technology could connect millions of devices into an Internet of Things? The truth is that technology systems have become far too complex to be managed by humans anymore. This battle is now being lost by humans and won by technology.

IBM defined the vision of autonomic computing where technology manages itself and adapts to unpredictable changes, but in actuality failed to deliver. We’ve been working hard at Qubell to make that vision a reality – starting with everyday application types: web applications, commerce platforms and big data analytics. And today we’re proud to share the news of two significant products...

Women in Technology | Power Panel at CloudExpo with Victoria Livschitz

A power panel dedicated to the growing role of devops in the enterprises recorded during the CloudExpo just got published. Here is a full 42-min video.

Stan presented Qubell and its premise of distributed governance at the final BayLISA event of 2014 on December 18th as a part of “Short but Cool” talks. 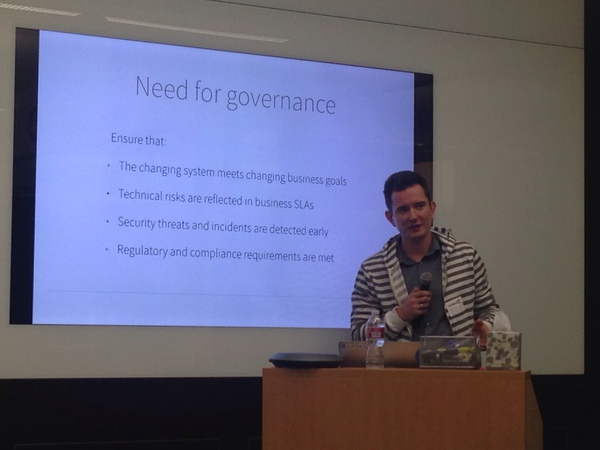 “Think about button makers and button users,” said Livschitz. “It's not about giving them tools, but rather creating self-service interfaces.”

By David Spark at Active Blog

"We have developers who are really passionate about getting their code out to customers, no matter what, in the shortest possible time. Operations are very focused on procedures and policies,”

DevOps Summit at CloudExpo Silicon Valley 2014 was a terrific event for us. Qubell booth was crowded all three days. We ran demos every 30 minutes with folks lining up to get a seat and usually standing around. It was great to meet and talk to over 500 people! My keynote was well received and so was Stan's joint presentation with RingCentral on Devops for BigData. I also participated in two Power Panels - Women in Technology and Why Devops Is Even More Important Than You Think, both featuring brilliant colleagues and moderators and a blast to be a part of.

Grid Dynamics folks were showcasing their technology called Agile Software Factory that pre-packages many popular open source technologies and tools into a fully-integrated technology suite for continuous delivery pipeline, from code changes to production updates. Qubell is used by the Agile Software Factory as the “logistics” engine to create dev/test/prod environments on-demand, as required by the release pipeline, and automate updates, upgrades and auto-recycling of used up environments.

Here are the links to the content of the keynote, panels and sessions posted so far:

DevOps Summit Keynote | Purpose-Defined Computing: The Next Frontier in Automation

Software is eating the world. Companies that were not previously in the technology space now find themselves competing with Google and Amazon on speed of innovation. As the innovation cycle accelerates, companies must embrace rapid and constant change to both applications and their infrastructure, and find a way to deliver speed and agility of development without sacrificing reliability or efficiency of operations.

Mike Becker from RingCentral and Stan Klimoff from Qubell share the lessons learned from implementing CI/CD pipeline on AWS for a customer analytics project powered by Cloudera Hadoop, HP Vertica and Tableau.

Qubell is staking out its territory in DevOps, with a collection of components, connectors and starter kits that are "self-deployable composite applications and blueprints that showcase a complete technical solution to a common business problem," in the words of the company.

SYS-CON Events announced today that Qubell has been named "Platinum Sponsor" of DevOps Summit Silicon Valley, which will take place on November 4-6, 2014, at the Santa Clara Convention Center in Santa Clara, CA.

By Yeshim Deniz for DevOps Journal

Q: How has your life experience made you the leader you are today?
A: Life is a collection of experiences that shape and define us, as a person and a leader. A part of me is an engineer and technologist that loves building systems - applications, platforms, teams, companies. A part of me is a mother of three kids, who sees deep similarities between...

What's Your Take on the American Dream? Guest Post for Women 2.0

Around the turn of the 20th century, millions of European immigrants poured through Ellis Island in pursuit of the American Dream, lured by the promise of a fresh start, plentiful employment and personal freedoms. Fast forward 100 years: We’ve endured a credit crisis, housing crisis, job crisis, health care crisis and a recession. Jobs are moving overseas to China and India, and more recently, Eastern Europe and Latin America.

By Victoria Livschitz for Women 2.0

People often ask how Qubell is different from Chef, Puppet, OpenShift, Docker, Heat, Ansible, Mesos, Kubernetes or some other hip product du jour. Like any comparison of apples to oranges, the answer involves a surprisingly deep investigation into botanical conventions, differences between cultivars and species, and even a venture into dangerous waters of “what is fruit, really?”. Intellectually stimulating, but not that useful from the nutritional standpoint.

A remarkable thing about 2014 is how every CTO and CIO seem to have finally gotten the memo that agility in software development and operations is not a buzz or a fad, but a direct and immediate threat to the survival - their own and their company's. A report after report...

Three Things I Wish I Had Known in My 20’s. Guest Post for Neon Notebook

At the age of 18, I was a carefree freshman at the University in Vilnius, Lithuania, like millions of others – studying, partying and playing chess, my sport of choice. 2 years later, at the age of 20, I was married, with 3-months old baby and $500 bucks in a pocket, landing in the city of Cleveland, USA on a one-way ticket from Moscow, in search of more opportunities and better live.

By Victoria Livschitz for Neon Notebook

EY today announced semifinalists for the EY Entrepreneur Of The YearTM 2014 Award in the Northern California region. The awards program recognizes entrepreneurs who demonstrate excellence and extraordinary success in such areas as innovation, financial performance, and personal commitment to their businesses and communities. These business leaders were selected as semifinalists from more than 100 nominations by a panel of independent judges. Award winners will be announced at a special gala event on June 10th at the Fairmont San Jose.

Grid Dynamics and Qubell Team Up to Offer Integrated Solutions to Boost E-Commerce Agility and Time to Market. Behavioral Analytics Starter Kit is the first joint offering from the technology pioneers.

Qubell launches to be the enterprise PaaS that actually prospers

The fate of companies billing themselves as Platform as a Service has generally been to get snapped up by a larger company, mostly on the chance that the PaaS may indeed prove to be a sound business. In the early days, platforms were snapped up based on their focus on a specific language or actual users, but as polyglot PaaS became common a few, such as AppFog, were left hoping for a savior in the form of a large partnership with a big player or for an exit that might break even for their backers.

Kohl’s Completes Initial Implementation of the Qubell Adaptive PaaS, which Helps Speed Delivery of Its Ecommerce Features and Services

Menlo Park, CA (PRWEB) June 19, 2013
Qubell, an innovator in application deployment and management, today announced that Kohl’s Department Stores, a specialty department store with 1,155 stores in 49 U.S. states, has completed a successful initial implementation of the Qubell Adaptive PaaS (platform-as-a-service) as a component of its current omnichannel technology initiatives.

Menlo Park, CA (PRWEB) June 19, 2013
Qubell, an innovator in application deployment and configuration management, emerged from stealth mode today and launched the Qubell™ Adaptive PaaS (platform-as-a-service), the first platform designed to enable enterprises to implement changes to their complex online services rapidly and without risking the stability of their system.

Thank you, your request has been mailed.
We will get back to you promptly.

Sorry, we seem to have a glitch and couldn’t process your message. Please, email us the old-fashioned way to sales@qubell.com, or call (888) 855-9440.

Thank you, your request has been mailed.
We will get back to you promptly.

Sorry, we seem to have a glitch and couldn’t process your message. Please, email us the old-fashioned way to sales@qubell.com with the subject “Case study”, or call (888) 855-9440.

Thank you for contacting Qubell sales.
We will get back to you promptly.

Sorry, we seem to have a glitch and couldn’t process your message. Please, email us the old-fashioned way to sales@qubell.com,
or call (888) 855-9440.

Qubell is now Tonomi. Please click below to proceed to our new site.